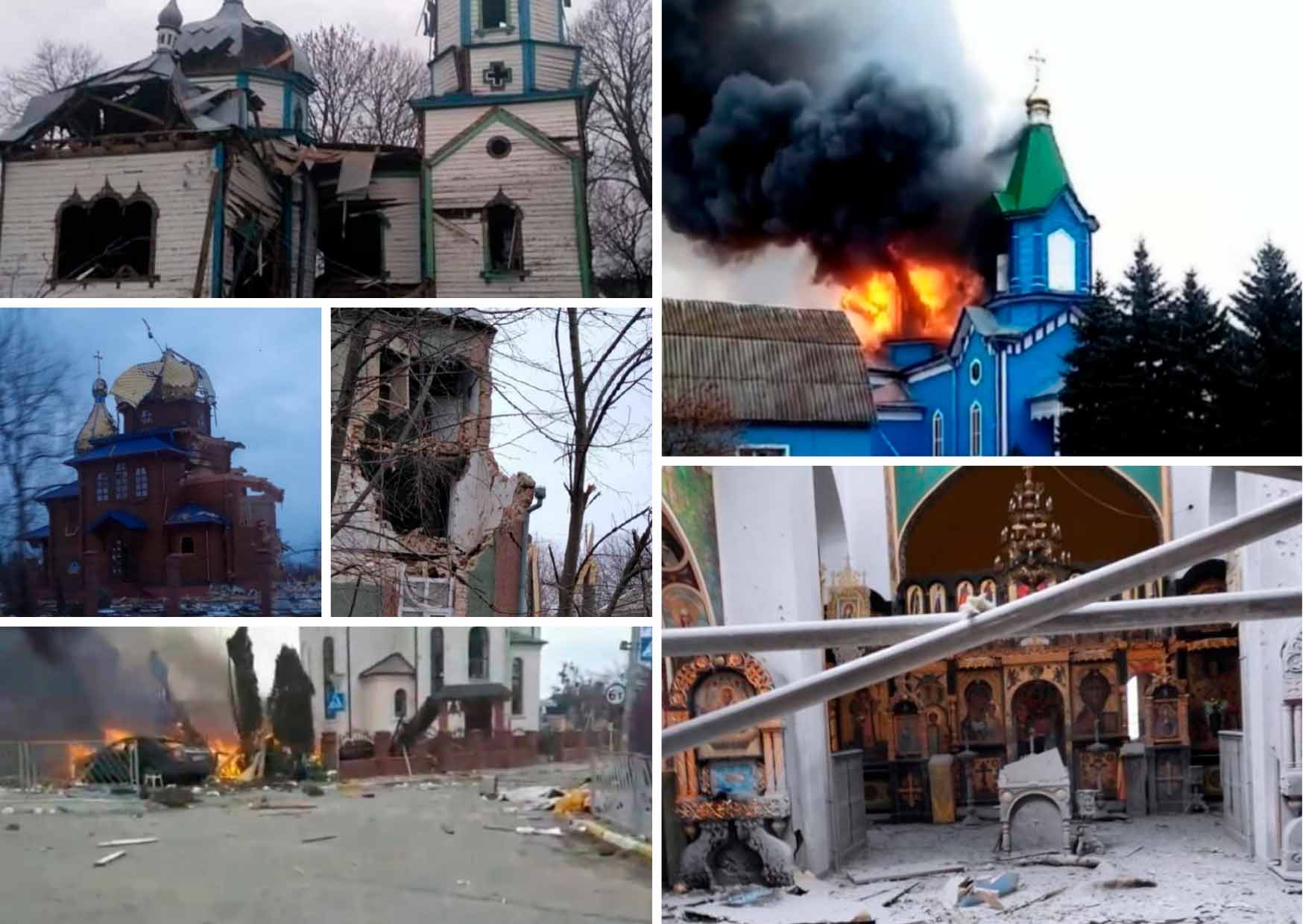 While Kremlin propagandists are cynically covering their imperial ambitions with statements about “protecting Orthodox faith”, the aggressive attack of the Russian military ruins Orthodox temples and other sacred sites of Ukraine’s religious communities.

At least 28 spiritual sites were badly affected in at least 6 regions of Ukraine: Kyiv, Donetsk, Zhytomyr, Luhansk, Kharkiv, and Chernihiv. Most of them are Orthodox churches.

On March 12, in Donetsk region, during bombing of Sviatohirsk, a city with peaceful civilian population, Sviatohirska Lavra was partly ruined.

On March 12, in Volnovakha city of Donets region, Russian shelling damaged the temple of the Orthodox Church of Ukraine.

During the night from March 11 to March 12, shelling of the village of Pyatyhatky, Kharkiv region, damaged the church of the Holy Faithful Queen Tamara.

On March 10, the shelling by the Russian occupiers destroyed the Church in honor of the prophet Elijah and the Apostle Andrew the First-Called in the village of Mostyshche, Fastiv district, Kyiv region.

On March 10, the shelling of Sievierodonetsk by Russian invaders partially destroyed the Nativity of Christ Cathedral.

On March 9, an explosive wave from the shelling of Kharkiv city damaged windows of a synagogue of the United Jewish Community of Ukraine. The synagogue was built in 1913 and was one of the largest in Europe at the time.

On the night of March 7 to 8, in Sumy city, the building of the Sumy Theological Seminary of the Ukrainian Orthodox Church was damaged as a result of an air raid by a Russian bomber.

On March 7 in Zavorychi village, Brovary district, Kyiv region, the St. George Church burned down because of Russian shelling. This Ukrainian Orthodox Church was built in 1873.

On March 7, a military attack destroyed the 160-year-old wooden church in honor of the Blessed Virgin of the Ukrainian Orthodox Church in the village of Vyazivka, Zhytomyr Region.

On March 7, the blast wave from the air strike of Byshev city (Kyiv region) ruined windows and doors of the Church of the Intercession of the Virgin Mary. (A photo after the blast is not yet available.)

On March 6, in the town of Malyn in Zhytomyr Region, during the shelling by the Russian occupiers, a bomb exploded near the Church of the Intercession in the very center of the town.

On March 6, nearby Irpin’ (Kyiv region) shelling damaged the Church of the Great Martyr George the Victorious.

On March 5, in the village of Yasnogorodka (Kyiv region), Russian shelling damaged the Church of the Nativity of the Blessed Virgin Mary. The dome was hit twice, the IFV shell damaged the bell tower. The parish house, which was built near the church, was also damaged. Temple windows and entrance doors were shot from a large-caliber machine gun. (Photos are not yet available.)

On March 5, 2022 as a result of the shelling, the Church of the Ascension of the Lord in the village of Bobryk, Kyiv region, was damaged.

On March 2, this year the temple in honor of the Holy Myrrh-bearing Women in Kharkiv city received damage due to shelling.

On March 2, stained glass windows were broken in the Dormition Cathedral of Kharkiv as a result of the shelling, church interior was damaged.

On March 2, this year the Kharkiv University St. Anthony’s Church, located in Kharkiv National University named after Karazin received damage as a result of the shelling: all the windows were broken here, church utensils were damaged.

On March 2 in Talakivka village nearby Mariupl city, an artillery attack damaged the main dome, roof and bell tower of the church in honor of the Nativity of the Virgin Mary. 30 years ago, in 1992 this temple was built anew on the same site where it had been destroyed during the Soviet times.

On March 1, in Kharkiv, a Russian missile hit curia building of the Kharkiv-Zaporizhzhia diocese of the Roman Catholic Church in Ukraine.

On March 1, Russian artillery damaged Kostiantynivska mosque and its related building in Kostiantynivka city of the Donetsk region.

On February 28, a military attack resulted into damages to St. Catherine’s Church in Shchasta town (translates from Ukrainian as Happiness) in Luhansk region.

On February 27, as a result of artillery shelling, the domes and roof of St. George’s Church in Nizhyn, Chernihiv Region, were damaged.

On the night of February 27-28, as a result of combat in Kyiv, the church in honor of St. Joasaph of Bilgorod on the International Square was damaged.

During the first days of the Russian attack against Ukraine, in Lysychansk city, Luhansk region, the windows and the interior of the second Mitrofanivsky temple as well as its Sunday school were damaged.

Photos from open sources and provided by witnesses.